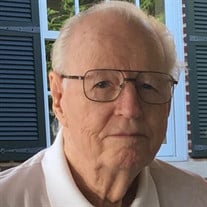 Dr. Alfred Curtis Long, Jr. (Curt) joined his wife Jean in Heaven on Thursday, March 4th, 2021. He passed peacefully at his home in Dublin in the care of Friendship at Home and Summit Hospice, the result of age-related issues. Curt was born to Alfred C. Long Sr. and Virginia (Sharp) Long on March 14, 1924 in Cadiz, OH, the youngest of 2 children. He was raised in and graduated from high school in Cadiz and attended Franklin & Marshall College, Washington & Jefferson College, Marquette University, and The Ohio State University. He attained a DDS degree from Ohio State in 1948. The Washington & Jefferson and Marquette years were in the latter days of WWII while Curt was in the Navy. He was honorably discharged from the Navy in 1948, but reenlisted in 1952 (thru 1954) due to the Korean conflict. Curt married Carolyn Jean Roshon on October 9, 1948. His career spanned dental practices in California and Ohio, but he had a passion for teaching and progressed from Associate Professor thru full Professor and department head (Fixed Partial Prostidontics) and finally Assistant Dean and Head of the Clinic at the Ohio State University College of Dentistry. From 1958 thru his passing, he was a member of the Scioto Country Club and for many years a passionate golfer, once traveling to Scotland to play in a Pro-Am four-ball tournament on many of the traditional Scottish links courses. During the sixties and early seventies, he was also a very active participant in Vaud-Villities. Across all this time, he was a devoted husband and father as well. He was preceded in death by Jean, his wife of 56 years, his parents and his sister. He is survived by his children, Wade (Marcy) Long of Santa Rosa Beach, FL and Lisa (Bruce) Coleman of Mt. Lebanon, PA; Grandchildren Max Long of Austin, TX, Hannah Long of Draper, UT and Audrey Coleman of Mt. Lebanon, PA. He will be very much missed by family and friends. In lieu of flowers, the family recommends financial contributions in his memory to the Foundation Fighting Blindness in the name of macular degeneration.

Dr. Alfred Curtis Long, Jr. (Curt) joined his wife Jean in Heaven on Thursday, March 4th, 2021. He passed peacefully at his home in Dublin in the care of Friendship at Home and Summit Hospice, the result of age-related issues. Curt was born... View Obituary & Service Information

The family of Dr. Alfred Curtis Long Jr. created this Life Tributes page to make it easy to share your memories.

Send flowers to the Long family.