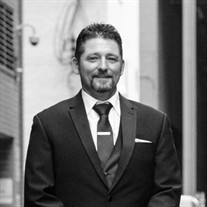 Vinnie Secen, age 49, passed away following an extended hospitalization on December 18, 2021. He was born August 25, 1972 in Cincinnati. He is preceded in death by grandparents, Urias and Dorothy Polly; uncles, Gene Mullins, Milton Polly, Glenn Polly. He is survived by his wife, Sherri Secen; daughters, Nikki Smith (Steven), Maurissa Wise; granddaughter Anilynn Thorp; parents, Vincent and Maylene Barbuto; brother Shawn Secen (Kim); sister Jamilynn Secen (James Martin); nephews, Steven Jenkins, Jacob Jenkins, Lucas Newton, Ace Newton, Blaze Martin; nieces, Elisebethe Newton, Molly Newton, Penny Newton, Ember Martin; his faithful service companion, Balto; many other uncles, aunts, cousins, other relatives, and good friends, Vinnie served in the United States Navy on the USS Independence during the Gulf War. Vinnie was an avid outdoorsman. He loved his family, country, combat sports, cars, and guns. To know Vinnie was to love him; he made life better. He was kind, brave, thoughtful, loyal, and always willing to help others. He was the epitome of what a man should be, admired by those who knew him, deeply cherished by all, and often referred to as "My Hero." His earthly presence will be missed; his spirit will live on through those who knew him. Visitation will be held Monday, December 27, 2021 from 11:00AM until the time of funeral service at 2:00PM at The River Valley Life Center, 2190 Coonpath Road NW, Lancaster Ohio. Interment will take place at Floral Hills Memory Gardens in Lancaster, Ohio following the funeral service. If ordering flowers, please alert the florist to deliver on the day of visitation/service to: The River Valley Life Center, 2190 Coonpath Road NW, Lancaster, Ohio 43130.

The family of Arnold Vincent Secen Jr. created this Life Tributes page to make it easy to share your memories.