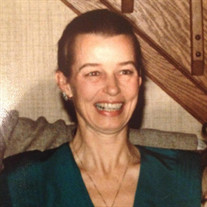 Berit Nilsson, 85 years of age, of Upper Arlington, Ohio, passed away on Sunday, May 2, 2021, at the Kobacker House hospice center in Columbus. She was born on March 29, 1936, in the Bay Ridge neighborhood of Brooklyn, New York, to the late Kristian and Frida (née Hansen) Nilsson, who had immigrated to the USA from Norway. Berit grew up in Cliffside Park, New Jersey, and enjoyed many days at the famous Palisades Amusement Park nearby. She went to college at Syracuse University and graduated with a bachelor’s degree in education. She married her college sweetheart, Edwin Tonnesen, and eventually moved to Bowling Green, Ohio, where they raised their two children. In the 1980s Berit moved to Columbus and was a resident of Upper Arlington for nearly 40 years. She became a massage therapist and had her own practice for many years. She started her own school as well, and taught a great many students the techniques that she used to help her clients. She became well known, and loved, in the massage therapy community in Central Ohio. Berit was a member of Living Savior Church in Grove City, where she met her second husband, her beloved James “Jim” Lama. The two of them were practically inseparable during their many years of dedicated marriage. Berit loved being with family and friends, and she took great pride in her Norwegian heritage. She had a zest for life that was unparalleled. Berit will be missed by all who loved her. Berit is survived by her daughter Hallie (née Tonnesen) Warren; son Jeffrey Nilsson Tonnesen; son-in-law Richard Warren; granddaughter Samantha (née Warren) Austin; grandson-in-law Ricky Austin; and two great-grandchildren, Mya Austin and Garrett Austin. She is preceded in death by her parents; her husband Jim; two sisters, Nina Bergsvik and Kristine Schulke; and grandson Michael Warren. The family would like to thank Ohio Health Hospice and the Kobacker House for their wonderful support and care. A Celebration of Life memorial service will be held on Saturday, October 2, at 2:00pm at Living Savior Ministries church, 1586 Dyer Rd, Grove City, OH 43123.

Berit Nilsson, 85 years of age, of Upper Arlington, Ohio, passed away on Sunday, May 2, 2021, at the Kobacker House hospice center in Columbus. She was born on March 29, 1936, in the Bay Ridge neighborhood of Brooklyn, New York, to the late... View Obituary & Service Information

The family of Berit Nilsson created this Life Tributes page to make it easy to share your memories.

Send flowers to the Nilsson family.