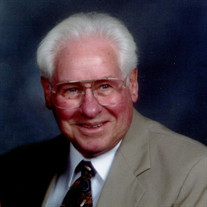 Charles F. Maisenbacher, age 90, of Upper Arlington, OH, passed away February 26, 2022. Chuck was born in Columbus, Ohio on February 13, 1932, to Robert and Francis (Orrison) Maisenbacher. He graduated from Groveport High School in 1950 and lettered 3 years in track and football. He joined the US Navy in 1951 and served four years, stationed in Pearl Harbor, HI and Adak, Alaska. He married Kiki (Poulos) on May 22, 1955 after returning from serving in the Navy. He went on to work as an electrician for Gustav Hirsch, and eventually became a superintendent. Some of the jobs he supervised at OSU were; Campus Christian Center, Phi Gamma Delta Fraternity, Kurl Drive Street Lighting, Underground Power to Drackett Towers, Project Manager in charge of all outside contractors at Western Electric and the new warehouse remodeling and lightening at Anthony Thomas Chocolate Factory. Following his time at Gustav Hirsch, he became the owner of L.L. Electric in 1978. In 1994 Chuck and Kiki purchased a villa on Hilton Head Island where they spent most spring and fall walking the beach and soaking up the sun. He is preceded in death by his parents Robert and Francis, brothers Richard, Jack and Paul Maisenbacher, brother-in laws John Polous and Nick Trifelos. Chuck is survived by his wife of 66 years, Kiki, sons; Gregg, Chris (Beth), Dean (Luann); grandchildren Ryan (Alex), Kristen, CJ (Fiancé Megan) and Katina; great granddaughter, Eliza; sisters-in law, Helen Trifelos and Helen Polous. Friends may call at O.R. WOODYARD NORTHWEST CHAPEL, 2990 Bethel Rd. Thursday 5-8 p.m. where the Trisagion prayer services will be 7:30 p.m. Thursday. Funeral service will be at 10:30 a.m. Friday at The Annunciation Greek Orthodox Cathedral, 555 N. High St. The family requests donations in his memory be made to The Annunciation Greek Orthodox Cathedral or Parkinson's Foundation, 200 SE 1st St, Ste 800, Miami, FL 33131.

The family of Charles F. Maisenbacher created this Life Tributes page to make it easy to share your memories.

Send flowers to the Maisenbacher family.