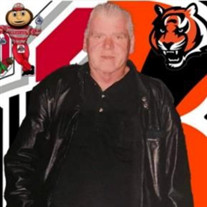 Maloney Sr., David W., age 72, was called home by our dear Lord on Sunday, September 12, 2021. He passed surrounded by his wife, children, sister, son-in-law, grandchildren, friends, and prayer at the James Cancer Hospital. Just as he managed all experiences in life, he faced his illness with strength, grace, and bravery. He was a U.S. Navy Veteran, and was employed with AC Humko (formerly Stokely, formerly Capital City Products) for 30 years, retired to Florida with his wife Billie, who he adored, and they returned to Columbus, Ohio in 2012 to be closer to their grandchildren. He was a driven man who worked extremely hard to provide for his family. He had a kind and loving heart, and an attitude of youth. We recall that children in the neighborhood would come to the door to ask if our father would come out to play; some affectionately called him “Geritol”. He would dress as Santa and visit nursing homes at Christmas with our choirs or majorette groups, passing out candy canes. He was the neighborhood EMT, not professionally, but because if someone was hurt, he would take off running with his first aid kit; occasionally parents would bring their children to him. Our neighborhood consisted of a few single mothers, or fathers that worked second or third shift, and they always knew he would help if needed. He answered every call with a perimeter walk and assurance to keep an eye out. He played as hard as he worked. He loved being an active band parent. He enjoyed camping with his children and grandchildren, attending races and mud runs with his son Dude, football games with his daughter Tabi, and he was an avid Buckeye and Bengals fan. He took care of many, most recently his darling wife, right up until three weeks ago when he became extremely fatigued, and we were informed he had cancer. He is preceded in death by his parents, William H. and Evelyn M. Maloney, sister Catherine Maloney, daughter-in-law Penny Marcum Maloney, grandson Timothy E. Meeks, and nieces, Rhonda, and Michelle Minturn. Left to cherish his memory is his beautiful wife of 52 years, Billie Maloney, sweet beloved sister Marty (Ron) Minturn; 4 children Anna (Ed) Mulford, Gina (Brad) Baker, David (T.J.) Maloney Jr., Tabitha (David) Fahner; 14 grandchildren Alexia (D.J.) Scherb Ricketts, Lindsie Riley, Branden (Marissa) Mulford, Trista (Ryan) Eyerman, Bradley (Ali) Baker Jr., David (Megan) Maloney III, David (Amanda) Fahner III, Matthew Fitch, Tyler Fitch, Katie Fitch, Braiden Fahner, Shaelyn Maloney, Aaliyah Maloney, Shawn Maloney; 10 great-grandchildren Larrica, Monica, Delainie, Brenden, Odin, Andrew, Braelynn, Delilah, Corvin and Jolin, many nieces, nephews, cousins and friends. We were raised to say, “love you, later – or later, love you”, Daddy said “goodbye” was forever. Come join us as we say “Love you, later” to our amazing father. He wouldn’t want fancy, so put on your game day, race day, or any day outfit and represent your team. If that team is the Browns or Steelers, we will welcome you anyway. If that team is *ichigan, it’s a good thing Daddy had a big heart. Nothing formal, just family and friends together to honor a one of kind person. #MaloneyStrong! Gathering hours are Monday, September 20, 2021, 5pm to 8pm at O.R. Woodyard, 1346 S. High St., Columbus, Ohio 43207, the Funeral is Tuesday September 21, 2021, 11am, Pastor Matthew Thompson officiating, interment to follow at Obetz Cemetery. Our parents did not give flowers, because we do not kill a plant as a gift. In lieu of flowers, please send living plants or donate in our father’s honor to cancer.org or dfyf.org (a nonprofit organization that helps at risk youth).

The family of David W. Maloney Sr. created this Life Tributes page to make it easy to share your memories.

Send flowers to the Maloney family.