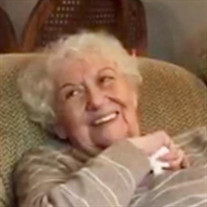 Delia Manzur Tabak, age 87, went to be with her Lord on September 30, 2021 in the presence of her two daughters, Mary Loden and Christine Brock, and her niece Emi Carrasco. She was an amazing role model for women, studying biochemistry and pharmacology in the 1950s and defending her PhD with a small child on her hip in the 1960s. She was truly ahead of her time. She met her spouse, Fernando Tabak (died in 1993) in college in Cordoba, Argentina, and they emigrated to New York City in the early 1960s to chase their career ambitions. She came to the USA speaking very little English but learned it on her own, mostly by watching episodes of “I Love Lucy.” She went on to work doing lung pathology research and got into industrial hygiene where she spent most of her career, doing research and analytical testing related to worker health and safety. She became a US Citizen in the 1980s, and loved this country. She taught her children the importance of financial independence and a strong work ethic. While she taught her girls traditional household skills such as cooking, cleaning and sewing, she also taught them the joys of income to hire someone else to do it. The ladies of the house often enjoyed a good restaurant meal, preferably with a yummy chocolate dessert. To know her was to love her. She was a genuinely kind and generous person. Her smile lit up the room and her hugs were healing. She encouraged her daughters, and anyone she loved, to be a woman or man of God and to know the Bible, by example. She knew God's Word and loved the Lord. She had a strong Christian faith, and she passed hearing her favorite Psalms read to her and with her favorite hymn "Holy, Holy, Holy" playing. Her loved ones miss her terribly, but know she's in a better place, happier than she has ever been. We know this is not goodbye forever, but farewell for now. We'll see her again in Heaven. Delia was preceded in death by her husband, Fernando, as well as 2 sisters and 4 brothers. She is survived by her two daughters Mary Loden and Christine (Michael) Brock; her four grandchildren, Gregory Loden, Alexander Loden, Nicholas Loden and Kayla Brock; her sister Salma Olga (Oscar) Carrasco; her brother Juan Carlos (Bibiana) Manzur; her niece Emi Carrasco; her long-time childhood friend Lilia “Chicha” Cassino and many loved family and friends.

Delia Manzur Tabak, age 87, went to be with her Lord on September 30, 2021 in the presence of her two daughters, Mary Loden and Christine Brock, and her niece Emi Carrasco. She was an amazing role model for women, studying biochemistry and... View Obituary & Service Information

The family of Delia Manzur Tabak created this Life Tributes page to make it easy to share your memories.

Delia Manzur Tabak, age 87, went to be with her Lord on September...

Send flowers to the Tabak family.