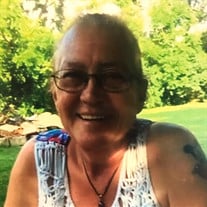 Diane Mae Cooper, age 61, passed away Friday, April 9, 2021 at Grant Medical Center in Columbus, OH. She was born March 2, 1960 in Columbus, OH to Barbara Hoover and the late Roger Burks. Diane put others before herself her entire life. She... View Obituary & Service Information

The family of Diane Mae Cooper created this Life Tributes page to make it easy to share your memories.

Send flowers to the Cooper family.