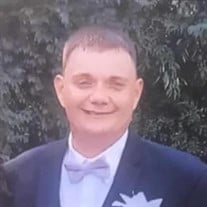 Dustin Lee Smith, age 35, passed away Saturday, August 7, 2021 at his home in Lockbourne, OH. Dustin was born January 6, 1986 in South Williamson, KY. Dustin loved his children and his animals. He is preceded in death by his grandparents, Robert... View Obituary & Service Information

The family of Dustin Lee Smith created this Life Tributes page to make it easy to share your memories.

Send flowers to the Smith family.