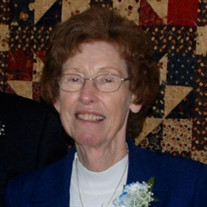 Esta "Merle" Wheeler, 84 of Columbus, Ohio passed away peacefully Sunday, November 14 with her family by her side. Merle was born on April 8, 1937 in Martha, Kentucky to the late Henry and Anna (Gillum) Stephens. She was proceeded in death by her loving husband, Freeman of nearly 63 years which she’s been heartbroken since his passing 2 months ago. 1 sister, Audie (Paul) Conley and 2 brothers, Isaac (Julie) Stephens and James (Levonia) Stephens. She is survived by her children, daughter, Anita and son-in-law, Steve Ellis of Columbus, OH, and her son, Richard J. and daughter-in-law, Debbie Wheeler of Marysville, OH. She was blessed with 3 grandchildren, Brandon J. Wheeler, of Cleveland, OH, Sarah N. Ellis and Rachel A. Ellis of Columbus, OH. She is also survived by three sisters, Mary Liddie (Doug) Lyons of Springfield, OH, Edna (Kenneth) Arrington, of Blaine, KY and Carol Sanders of Knoxville, TN. Brother-in-law and sister-in-law, Virgil and Roberta Wheeler of Columbus, OH, sister-in-law Pauline Wheeler of Ashland, KY and many special nieces and nephews. Merle was devoted to taking care of her husband and children. After their children grew up, Merle enjoyed her job at COVA (Center of Vocational Alternatives) until retirement. Merle was a loving and devoted wife, Mom and Mamaw and cherished time with all her family. Merle enjoyed traveling, camping, and boating, with family for many years. Merle was always so excited to see and spend time with her grandchildren. Merle was saved and joined the United Baptist Church in 1962. She was a member of the Hickory Grove United Baptist Church in Mechanicsburg, Ohio. Freeman and Merle were deacons in the Church since the early 60s. She loved the Church family and was devoted to the Lord’s work. She always had a smile on her face and was so happy to see her brothers, sisters and friends. Visitation will be at O.R. Woodyard Funeral Home, 1346 S. High St., Columbus, Ohio 43207 on Friday, November 19th from 6:00-8:00 p.m. Funeral Services will be held at Hickory Grove United Baptist Church, 9681 OH-161, Mechanicsburg, OH 43044, on Saturday, November 20th. Family and friends may arrive at 10:00 a.m. and the funeral starting at 11:00 a.m. Elders Patrick Gilliland, Tony Blair, Todd Scheiderer, and Keith Scheiderer officiating. Burial will be at Concord Cemetery, in Grove City, OH following the service. Dinner will be provided by the sisters from Hickory Grove Church at the family home after the burial.

Esta "Merle" Wheeler, 84 of Columbus, Ohio passed away peacefully Sunday, November 14 with her family by her side. Merle was born on April 8, 1937 in Martha, Kentucky to the late Henry and Anna (Gillum) Stephens. She was proceeded in death... View Obituary & Service Information

The family of Esta "Merle" Wheeler created this Life Tributes page to make it easy to share your memories.

Send flowers to the Wheeler family.