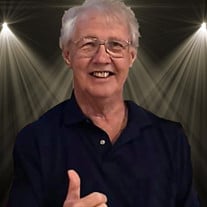 Frank R. Earl III, age 75 of Columbus, was given his final “last call” on April 5, 2022 after a hard-fought battle with cancer. Born in Schenectady, New York in 1947, Frank developed a love for music at an early age. By the time he was a teenager, he was already playing in a band – not just one instrument, but all of them! Frank was always “Taking Care of Business.” After moving to Columbus, his love for music and entrepreneurial spirit took him to the night club scene where he owned and operated a couple of lounges. A talented and skilled musician, Frank, also known as Frankie Diamond, could shred the guitar, rock the piano, play the drums, and sing anything. You would often hear people remark that Frank sang Elvis better than Elvis! Frank loved to tell stories of his years in music and was proud of the time he spent playing keyboards for Bob Seger. A consummate entertainer, his stage presence was larger than life. He was truly in his element when he was on stage. Nothing made him happier than making people smile, laugh and dance! His personality could light up a room and people of all generations were drawn to his infectious smile, and positive outlook. He was also notorious for his impersonations like Rocky and Bullwinkle, Porky Pig, Yogi Bear and of course, Elvis. While music was his passion, his true love was his family. He was a devoted father to Rocky and enjoyed watching him develop as an athlete. Frank was so happy as their relationship flourished from not just a father and son, but into a treasured friendship. As an only child, the friendships he cultivated through the years were viewed as family. Like trying to play a 6-string with only 5, friends like Harold “Porky” Speakman, Terry Gunderson, Cliff Kindle, Mike Weber and John Farmer will always feel a bit out of tune without Frank. Frank was preceded in death by his parents Frank and Meriam Earl and wife Roberkia “Berkie” Earl. He is survived by his one son, Frank R. “Rocky” Earl IV and father-in-law, French David Wood, Sr., and beloved 15-year-old poodle, Diamond. He will also be missed terribly by his fiancé Larena Stimmell who was his singing partner, companion, beach buddy, and best friend. Friends and family are welcome to Frankie’s last gig located at O.R. Woodyard Funeral Home, 1346 S. High Street, Columbus OH 43207. Calling hours begin at 11:00 a.m. followed by funeral service at 1:00 p.m. with Pastor Tim Wolmack officiating. Interment at Pleasant Cemetery, Mount Sterling, Ohio.

The family of Frank R. Earl III created this Life Tributes page to make it easy to share your memories.

Send flowers to the Earl family.