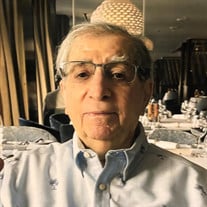 Dr. George M. Saribalas, surrounded by his beloved family, was called to be with the Lord, his wife and family on August 22, 2021. George was born in the family home on the Aegean Island of Skopelos, Greece on December 5, 1926. He immigrated from Greece to the US in 1927 with his mother, Zoe Chrisanthi Saribalas to be with his father Michael George Saribalas who obtained work in a steel mill in Farrell, PA. He was the eldest of four children (Mary, Sophie and Theresa) working various jobs as a boy selling newspapers, shining shoes for pennies to help support the family and working in the steel mill. George thrived in athletics playing GAPA basketball for the Farrell church, tennis and was a Pennsylvania State HS Wrestling Champion. George wanted to give back to his country and enlisted in the US Navy during WW II initially trained as a gunner in a US Navy PBY aircraft and then became a US Navy Medical Corpsman stationed in the Pacific Theater with the US Marines. At the conclusion of WWII, he used the GI Bill to further his education and graduated from the University of Cincinnati Conservatory of Music. He subsequently graduated with four degrees, Bachelors, Masters, Specialist and a Ph.D. all in Education. He was an avid Buckeye fan and was fortunate enough to become a graduate assistant director on the Ohio State Marching Band. He proudly served as a choir director and sang tenor in multiple Greek Orthodox churches in the Metropolis such as The Annunciation in Farrell, PA, St. Nicholas in Cincinnati, St. George in Massillon, The Ohio Valley Choir, consisting of voices from four Greek Orthodox Churches in Ohio and West Virginia, and The Annunciation Greek Orthodox Cathedral in Columbus, totaling almost 60 years. He was awarded medals by the Greek Orthodox Church of North and South America. It was during this time of choir directing that he met his wife Jeanette (Anastasia) Chakeres who was the choir director of the Columbus Greek Orthodox church. The two married in 1955 and had two children Michael George and Joy (Zoe) Marie. George worked in education his entire life as a music teacher and High School band director in Baltimore, Assistant Superintendent of Schools in Dover, Superintendent of Schools in Cadiz and Logan, and retiring as a Director with the Ohio Department of Education. George was vibrant his entire life taking multiple trips home to Greece to visit with his relatives in Athens, Agios Stefanos and Skopelos and enjoying multiple Mediterranean and Caribbean cruises. He lived in his house in Dublin since his beloved wife, Jeanette passed away ten years ,ago. George is survived by his children Michael (Amy) and Joy (Tim), grandchildren Marisa, Melina, George, Anastasia and Gregory, Sisters Mary Fleming and Theresa Andrews, Nephew, Mark Fleming, Niece, Karen Fleming, Grand Nieces, Christine, Mary Alexis, Katie (Tim), and Great Grand Nephews, and ,many extended family on two continents. Friends may call from 2 to 5 PM on Sunday, August 29, 2021 at the O. R. Woodyard Northwest Chapel, 2990 Bethel Rd. The Funeral Service will be on Monday at 10 AM at the Annunciation Greek Orthodox Cathedral, 555 N. High St, Columbus, OH 43215. Interment Union Cemetery. In lieu of flowers, donations may be made to the Annunciatiion Greek Orthodox Cathedral, 555 N. High St., Columbus, OH 43215.

Dr. George M. Saribalas, surrounded by his beloved family, was called to be with the Lord, his wife and family on August 22, 2021. George was born in the family home on the Aegean Island of Skopelos, Greece on December 5, 1926. He immigrated... View Obituary & Service Information

The family of Dr. George M. Saribalas created this Life Tributes page to make it easy to share your memories.

Dr. George M. Saribalas, surrounded by his beloved family, was...

Send flowers to the Saribalas family.