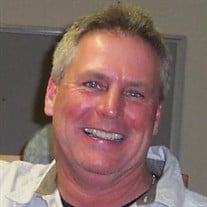 John H. Hagans, of Columbus, Ohio, passed away on March 14, 2021 at the age of 62 after a year’s long battle with cancer. John was born in Columbus, Ohio on June 25, 1958 to Jack Lewis Hagans and Shirley Ann (Lewis) Hagans who have both preceded John in death. Family meant the world to John. He loved being with his children and grandchildren as well as being at extended family get-togethers. His one passion was the yearly Christmas party he always had for the whole family where even Santa paid a visit. Cook outs and the Fourth of July were always a must. John was known for his gardening skills and was sought out by neighbors and friends for advice and/or help. It was nothing for him to be working in the yard and then disappear to a neighbor’s house who needed his assistance. He had a passion for creating backyard ponds that made you feel you had come upon this vision in an uninhabited location. John also enjoyed fishing and spent time with his son doing just that. He loved walking in the woods or just watching the sunset. Most of John’s career was working in the chemical field, first at Hubman Chemical and lastly at Franklin International. When John left Franklin he was a maintenance mechanic. But John had other jobs earlier in his life. He rehabbed houses and apartments and could fix anything, which was another plus for our friends and neighbors. John was also the youngest Corrections Officer to be hired at the Ohio Penitentiary. John was known for stories of his life and for his jokes. He was always the “life of the party” at any gathering. Most everyone he knew could listen to his stories no matter how many times they heard them and always told him he should write a book. John enjoyed making people laugh. He was also a history buff. He could tell you just about anything of the history of Columbus and surrounding areas. John had strong beliefs and convictions and was never afraid to say what he thought. He was the type of person who would stand his ground but could also be compassionate towards people. He was a charitable person with his time and possessions. He had a heart of gold. John will be greatly missed but is with our Lord now, in no more pain and watching over us all. Rest in peace our beloved John. John leaves behind his wife, Pamela Hagans of Columbus, Ohio. He is also survived by his children, Liz Lind (Rich Lind) of Grandview, Ohio, Jerri Mathew (Jacob Mathew) of Hummelstown, Pennsylvania, John R. Hagans (Angie Hagans) of Columbus, Ohio, James Hagans, and Kaidance Wade of Columbus, Ohio; Teresa Hagans; grandchildren J’lea, Jaylen, Alina, Aneela, Adam, Sophia and Jasmine; sister Kamryn Ream (Doug Ream) of Grove City and brother Steven Hagans (Penny Hagans) of Columbus, Ohio. John was preceded in death by his brother Michael Hagans of Washington Courthouse, Ohio and his sister Brenda Lute of London, Ohio. Visitation for family and friends will be held Saturday, March 27, 2021 from 12 PM to 2 PM at O.R. WOODYARD FUNERAL HOME - SOUTH CHAPEL, 1346 S. High St., Columbus, OH 43207. A small service will be held at 2 PM following visitation. Masks are required for all that attend.

The family of John H. Hagans created this Life Tributes page to make it easy to share your memories.

Send flowers to the Hagans family.