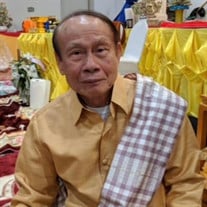 Khamsing Rajamountry, 84, of Columbus, Ohio, passed away in the comfort of his own home on December 10, 2021. He was surrounded by his family and loved ones who will continue to honor his legacy by living their lives to the fullest. Khamsing grew up in a small town in Laos with his parents, four brothers, and two sisters. He began his education at Buddhist temple school (wat school) in Laos and Cambodia and then attended the Stafford College in Ceylon (Sri Lanka). Khamsing was multilingual in English, Lao, Thai, French and Cambodian. He worked two years for International Voluntary Services as an interpreter translator for American Embassy. Khamsing immigrated to the United States with his beautiful wife, Laky, and their six children in 1979. He established a temple in Columbus in 1987 called WatLao Buddamamakaran which still stands strong today. Khamsing was a licensed case worker for the Catholic diocese of Columbus for 16 years and spent 12 years as a director for Community Refugee and Immigration Services. He continued his passion for helping individuals and families from countries all over the world until he retired at the age of 71. Khamsing poured his heart and soul into his work and all the people he worked with absolutely admired him. Khamsing touched everybody’s lives and made it a point to make all those he encountered feel so important and special. Anyone who knew him was touched by his generosity, kindness, and humor. He was truly a peacemaker and was always a source of positivity. Khamsing is survived by his wife, Laky, six children - son Souksamone, daughters Soukthavy, Sysamouth, Syamphone, Kayamphone, Singnakhone; 15 grandchildren Malissa, Michael, Jasmine, Ashley, Alex, Cameron, Peyton, Vincent, Jaida, Jayson, Dominic, Ayla, Justin, Austin, Isabella; and three great grandchildren Ethan, Maverik and Ronin. Khamsing was a loving husband, father, grandfather, and friend to everyone. He will forever be in their hearts and missed every day very much. A service to celebrate his life will be held Saturday, December 18th at 2:00pm at O. R. Woodyard Co. Funeral & Cremation Services, 1346 S High St, Columbus, OH. Visitation on Friday, December 17th from 4:00pm-5:00pm. In lieu of flowers, the family has requested that remembrances be made in the form of contributions to WatLao Buddamamakaran. https://everloved.com/life-of/khamsing-rajamountry/donate/ Zoom Link

Khamsing Rajamountry, 84, of Columbus, Ohio, passed away in the comfort of his own home on December 10, 2021. He was surrounded by his family and loved ones who will continue to honor his legacy by living their lives to the fullest. Khamsing... View Obituary & Service Information

The family of Khamsing Rajamountry created this Life Tributes page to make it easy to share your memories.

Send flowers to the Rajamountry family.