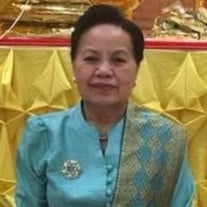 Khaysy Phandouangsy (June 15, 1950 – April 17, 2022) Khaysy Phandouangsy, age 71, departed her loving family on April 17, 2022, to reunite with the love of her life, Chay at long last. She was surrounded by her family and loved ones who will miss her dearly. Khaysy grew up in a small town in Laos with her parents, three brothers - Bounsy, Ke, Nousin and sister Laky. While attending college she met and later married Chay Phandouangsy. Their love for learning and teaching bonded them and led them to become educators at an elementary school where Khaysy was a teacher and Chay was the school principal. Khaysy was influenced by her family to be a loving and caring woman, always giving her time to others, and she incorporated that into her teaching career and motherhood. Khaysy immigrated to the United States with her husband and two sons in 1984 to build a good life where her sons could live the American dream. Although life wasn’t always kind to her with the loss of her husband and a health scare that led to her early retirement, she remained positive. She generously gave her time, heart and soul to her family and community. Her soul will continue living on through her adoring family and friends. Khaysy was a kind and lovable woman who, throughout her lifetime, devoted herself to her religion and the people around her. She remained a faithful Buddhist for her entire life and made a family out of her temple group. Khaysy is survived by her two sons - Silixay and Khanthavilay; six grandchildren – Aaron, Kyle, Dylan, Jessica, Janessa, Paul; sister Laky Rajamountry. She was a loving mother, grandmother, sister, aunt, and friend to everyone. She will forever be in their hearts and sorely missed every day. Funeral service will be held Saturday, April 23 at 2:00pm at O. R. Woodyard Co. Funeral & Cremation Services, 1346 S High St, Columbus, OH. Visitation on Friday, April 22 from 4:00pm-5:00pm.

The family of Khaysy Phandouangsy created this Life Tributes page to make it easy to share your memories.

Send flowers to the Phandouangsy family.