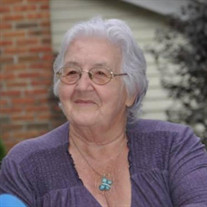 Lavernia Mae (Bailey) Romine, age 84, of Columbus Ohio went home to be with the lord surrounded by family on February 14, 2022. Mae was born September 10, 1937 to Harry and Cynthia (Boles) Bailey. She grew up in Middleport Ohio where she learned how to work hard and to care for others. She came to Columbus and started working at a young age. She was always working to make things better like her work on the Franklinton Commission, Gladden Community House and South Side Settlement House. She also found her calling to help others at the Inner City Ministries in Franklinton. She also served the lord at the Homeland Church in Grove City. She retired from the Ohio Department of Agriculture were served as Secretary/Treasurer for her union. She was awarded the Horizon Award for her service, volunteerism, donation and heroism with the OCSEA Chapter 4550. More than anything she loved her family. She is preceded on death by her husband Henry Romine, parents, brothers Harry Bailey, Robert (Bob) Bailey, Paul Bailey, grandson Chris Manley. She is survived by her children, Della (Russ) Metzger, Mary (Tim) Money, Henry Romine, Karen (Les) Smith, James (Jennifer) Almon, grandchildren Robert (Colleen) McQuaid, Tracey Manley, Mike (Amber) Manley, Thomas Money, Les (Lauren) Smith, Ricky Romine, Allen Romine, Jammie Romine, Jennifer (Brian) Dennis, Chantel Almon, Derek Harvey, Stephen Almon, McKenzie Almon, 20 great-grandchildren, several great-great-grandchildren, brothers Richard Bailey, James Bailey, sister-in-law Bonnie Bailey, many nieces, nephews and friends. A special thanks to all the staff and residents at Meadow Grove Transitional Care for all your care, love and friendship over the years she was with you. We know you will miss her as much as we do. Visitation will be Saturday, February 19, 2022 from 2 until time of funeral service at 4 p.m. at the O.R. Woodyard Co. South Chapel, 1346 S. High St. in Columbus, OH. Pastor Jeff Harlan officiating. Zoom link for service starting at 4 pm https://us02web.zoom.us/j/89297034570?pwd=bmtiSkJxWkFLVktCNFEvd2hWWENwZz09

Lavernia Mae (Bailey) Romine, age 84, of Columbus Ohio went home to be with the lord surrounded by family on February 14, 2022. Mae was born September 10, 1937 to Harry and Cynthia (Boles) Bailey. She grew up in Middleport Ohio where she learned... View Obituary & Service Information

The family of Lavernia Mae Romine created this Life Tributes page to make it easy to share your memories.

Send flowers to the Romine family.