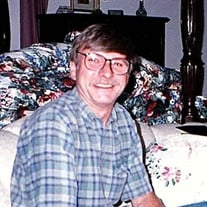 Lee Allan Murphy born October 19, 1951, died March 6, 2021. Lee was born in Elkhart, Indiana and grew up in Edwardsburg, Michigan. He moved back to Elkhart, Indiana when he married his wife, the former Linda Kay Weatherton who survives him, also one son, Jason (Kristina); sister, Darlyn Sue Smale (Tim); 2 granddaughters, Heather Swint (Josh) and Taylor Murphy; grandson, Joshua Murphy; 2 great granddaughters, Natalie and Jennifer Swint; great grandson, Nathan Swint; stepdad, William Krueger. Preceded in death by his parents, Robert Eugene Murphy and Marilyn Joyce Biltz Murphy Krueger; brother, Keith L. Murphy; grandparents, Mr. & Mrs. Clarence Biltz and Mr. & Mrs. Eugene Murphy. Lee was a 1969 graduate of Edwardsburg Michigan High School. In high school Lee bowled at Terrace Lanes in Adamsville, Michigan where he won many bowling trophies. Later Lee was on a bowling league from Shalom United Methodist Church at Tike Lanes in Lancaster, Ohio with his wife. As a youngster he loved race cars and loved the Indianapolis 500 on Memorial Weekend. He and about 4 other friends, for several years, raced their bikes all over the Adamsville Cemetery as they pretended to be in the Indy 500 that weekend. Lee and his future wife went to the Indy time trials after her prom instead of going to the Dunes in Michigan, which is where everyone went after the prom. Lee worked on the Indiana Toll Road during and after high school until he went in the United States Air Force March 6, 1971. He started in the security police when he was at North Truro AFB in Cape Cod, MA. He transferred to Grissom AFB in Bunker Hill, Indiana where he transferred into the Fire Department. From Grissom AFB to Rickenbacker Fire Department in Lockboune, Ohio where he retired from as a Federal Firefighter. Lee enjoyed camping with his family while growing up. Later Also with his wife and son. One of the family highlights was taking their son back to Cape Cod and showing Jason where he lived as a little one. Lee enjoyed so much that vacation and on the way back home he surprised Jason with a trip to Coopers Town, NY. Lee always loved to give Jason surprises like the Christmas when he have Jason his ne bike later on Christmas Day Evening. Lee loved to watch Jason, whenever he wasn't working, playing little league baseball then on to basketball in middle school and high school. All Lee's grandchildren had their grandpa at all the different sport events. He loved watching his grandchildren in all their different sporting events. Lee enjoyed his pet dogs and took it very hard when one of his pets passed on. Of all his pets his most favorite was Chipper and this was his hardest loss of all his pets. Lee loved going to antique shops. He always found something even if it was a fire hydrant that he painted in Notre Dame Colors. He hung his American Flag, he was so proud of, and his Notre Dame Flags from his new flag pole that he made. Later instead of going with his wife to antique shops, he started taking his buddy, Joshua and they said they were going picking. They loved doing things together. Lee enjoyed going to car shows. He ended up having 3 antique cars that he drove for pleasure and put in car shows. Starting with his Ford Falcon, then his Chevy Cavalier, then his favorite which was his Mazda Miata. Grandpa and Joshua loved putting the top down and taking off in the Miata. Lee worked with two men who also had Mazda Miata's. They were going to take off for a long Miata ride to northwest Ohio this past spring, but because of covid and Lee's death this never happened. Services will be held at Shalom United Methodist Church 4925 Plum Road N W Carroll, Ohio 43112 starting with visitation from 12 Noon until time the memorial service and celebration of Lee's life which will begin at 1 pm. Pastor Peter Borhauer of the church and Lee's nephew Reverend Cory E. Weatherton of Goshen, Indiana will officiate. Inurnment will follow at 4 pm in Obetz Cemetery with the fire department honors and military honors. Donations may be made to the Shalom United Methodist Church or Citizens For Humane Action 3765 Corporate Dr. Columbus, Ohio 43231.

Lee Allan Murphy born October 19, 1951, died March 6, 2021. Lee was born in Elkhart, Indiana and grew up in Edwardsburg, Michigan. He moved back to Elkhart, Indiana when he married his wife, the former Linda Kay Weatherton who survives him,... View Obituary & Service Information

The family of Lee Allan Murphy created this Life Tributes page to make it easy to share your memories.

Send flowers to the Murphy family.