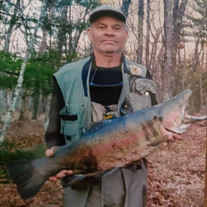 Michael Allen Cole aka Grizzly 4/20/1963 - 8/20/2021 Michael Cole, of Grove City, Ohio, formally Standwood, MI passed away unexpectedly on Friday, August 20th, 2021. He will be dearly missed by everyone's life that he touched. Anyone that you would ask, would let you know that Mike was beyond devoted to his work and that if he wasn't working, or with his beautiful wife Rose; he was either fishing or hunting. Mike was a man who wore many hats and was able to fix merely anything - that's simply what he loved to do, that was his job, but also his passion. He was a General Contractor for himself at, "Mike Cole's Home Remodeling.". His work, and the people he was able to help was his pride and joy. Michael Allen Cole is preceded in death by his father, Elmer Cole, and his mother-in-law, Jean Hernandez. He is survived by his wife of thirty years, Rose Cole; his mother, Illa Cole; his daughter, Shawna Prince, (Bobby Prince), his sister, Linda (Cole) Stewart; his brother Joseph Cole, (Francine Cole); his son, Ryan (Blake) Cole; his niece; Brittany Staal (Cole), (Jeff Staal); his nephew, Joseph "JC" Cole, (Bridget Cole); and his two great niece's, Kennedy Cole and Braelynn Staal. Viewing Services will be held at O.R. Woodward CO. Funeral and Cremation Services, 1346 S. High St, Columbus Ohio - 43207. The family has kindly asked to keep things close together between them all, for this has been unexpected and heart wrenching to the utmost extent. We would like to express our appreciation and gratitude to all our family and friends for all of the help and love we have been shown at this time. We will miss Mike so, so dearly.

Michael Allen Cole aka Grizzly 4/20/1963 - 8/20/2021 Michael Cole, of Grove City, Ohio, formally Standwood, MI passed away unexpectedly on Friday, August 20th, 2021. He will be dearly missed by everyone's life that he touched. Anyone that... View Obituary & Service Information

The family of Michael "Grizzly" Allen Cole created this Life Tributes page to make it easy to share your memories.

Send flowers to the Cole family.