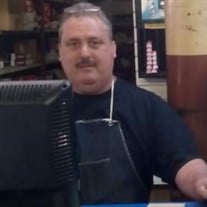 Michael Scott Powell “Mike”, age 59, of Circleville, passed away at Riverside Methodist Hospital on September 3, 2021 surrounded by family and friends. Mike was born on June 24, 1962 to the late Saundra (Allen) and Samuel Powell in Columbus, Ohio. He grew up in the southend of Columbus prior to moving and residing in Circleville with his wife and children. Mike worked at Southside Cycle and Mowers as a teenager where he later became the owner. He was a very caring and generous person who loved his family unconditionally. Mike was preceded in death by his sister, Peggy (Powell) Matheny; brother, Samuel Powell; and nieces, Shannon Powell and Kaci Sells. He is survived by his wife and best friend of 21 years, Valerie Myers. In addition to his wife are his children, Brandi Powell (Dru), Megan Miller (Myers) (Malcolm), Jacob Myers and Faith Powell, and two grandchildren, Carminn and Dru. He is survived by his step-mom, Betty Powell; his brothers, Tim Powell (Karen) and Tom Powell; sister, Pam Powell (Jim); sisters-in-law, Angie Marshall, Laura Garren (Jack Garren); and mother-in-law, Deborah Marshall (Tom). He has many nieces and nephews, as well as many great nieces and nephews and his best bud, Chip (James) Quick. Mike also leaves behind many, many friends who were thought of as family. A visitation will be held from 4-6 pm Friday, September 10th with a service following immediately at 6 pm at The O.R. WOODYARD COMPANY COMPANY CHAPEL 1346 South High Street in Columbus, Ohio 43207. There will be a celebration of life to follow at the Hey Hey Bar and Grill. We would like to thank the Circleville first responders, the emergency department of Ohio Health Berger and the clinical staff and chaplains at Riverside Methodist Hospital for the excellent care he received. We would also like to thank our neighbors for all of the continued love and support.

The family of Michael Scott Powell created this Life Tributes page to make it easy to share your memories.

Send flowers to the Powell family.