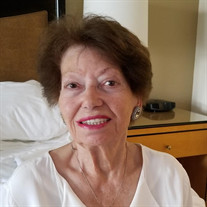 In loving memory of Paraskevi Mandas, who passed-away July 22, 2021 from complications following a stroke. She is preceded in death by her Husband of 53 years, Venizelos Mandas who passed away on August 29, 1998 and her beloved granddaughter Jacqueline Mandas who passed away September 4, 1996. She is survived by her son Dimitrios Mandas of Columbus Ohio (wife Maria), by daughters Vasiliki “Vana” Dumenil of Rouen France, Antoinette Mandas of Ormand Beach Florida, and Alice Balcerzak of Columbus Ohio (husband Tom); by her grandchildren Alkistis Poulopoulou, Sophia Dumenil, Nicolas Georgoudiou, Stephanie Gerogoudiou, Annette Vlasidis (husband Niko), Venizelos Mandas, Sarris Birch (husband Tyler), Elizabeth Onders (husband Zachary) and Olivia Balcerzak; and, by her great-grandchildren, Andrew Georgoudiou, Millie Georgoudiou, Callie Georgoudiou, Petro Vlasidis and Dimitri Vlasidis. Paraskevi, also known as Voula and as Yaiya by her grandchildren, was born on the island of Paros, Greece and was baptized into the Greek Orthodox Church. She met her husband in Athens, where her daughters Vana and Antoinette were born. Her son, Dimitrios, was born when the family lived on the island of Crete. The family then immigrated to Montreal, Canada in 1955 where her daughter Alice was born several years later. In 1976 the family immigrated to Columbus, Ohio where they ran several successful businesses, including Patisserie Mandas & Son in the French Market, a shopping destination on the north end of town. After retiring in 1986, she traveled often with her husband to their favorite destination of Hot Springs, Arkansas and visited their daughter, Antoinette in Florida. She enjoyed spending time with her family and cooking. She was a wonderful and dedicated mother, grandmother and great-grandmother. She will be missed by those who knew her. Friends may call at the O.R. WOODYARD CO. NORTHWEST CHAPEL, 2990 Bethel Rd. Monday August 2, 2021 from 4 to 7 p.m. Services will be held at the Annuciation Greek Orthodox CathedraL 555 N. High St. Tuesday August 3, 2021 at 10 a.m. In lieu of flowers the family ask that a donation be made in the name of Paraskevi Mandas to the Greek Orthodox Church or The Kobacker House.

In loving memory of Paraskevi Mandas, who passed-away July 22, 2021 from complications following a stroke. She is preceded in death by her Husband of 53 years, Venizelos Mandas who passed away on August 29, 1998 and her beloved granddaughter... View Obituary & Service Information

The family of Paraskevi Mandas created this Life Tributes page to make it easy to share your memories.

In loving memory of Paraskevi Mandas, who passed-away July 22,...

Send flowers to the Mandas family.