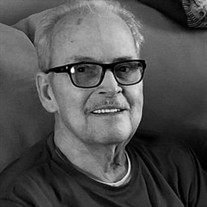 Ralph S. Lindsey, better known as Sonny, stepped into heaven on April 6, 2022. Born September 18, 1934. He passed peacefully in his home surrounded by love. He'd tell you his greatest accomplishment was his family. Especially his children who he loved unconditionally. Sonny deeply loved his wife Nita, who proceeds his death. They spent 62 years of marriage building a beautiful life together. Sonny had an always welcoming home, even to those during their most unlovable times. He spent much of his life working numerous jobs. Sometimes, three at a time. He’d tell you not to do that. It just takes time away from your family and you can’t get time back. He was a semi-driver in the Teamsters Union for 40 years. When he wasn't in his garden, he could be found watching the Ohio state buckeyes, listening to his music, or trying to make someone laugh. He is survived by children, Joe Daugherty (Diane), Sheryl Uhrig, Teresa Lauritsen (Butch), Melody Holderby, Tammy Perdue (Bill), and Ralph Lindsey. Also survived by a sister, Yvonne Laxton, brothers in law Rich Self ( Barb) and Jeff Self (Sandy), sister in law, Kathy Fike. Besides his wife, Ralph is proceeded in death by his Son, Randy Lindsey, grandson, Tim McMahen, sons-in-law, Jim Holderby and Keil Uhrig. Also proceeded in death by several sisters, brothers, sisters in law and brothers in law. Ralph had too many grandchildren, great-grandchildren, great-great-grandchildren, nieces, and nephews to list. Friends may call at O. R. Woodyard Co. Chapel 1346 S. High Street, Columbus, Ohio, Wednesday, April 13, 2022 from 4pm-7pm. where funeral service will be held Thursday, April 14th, 11am. Pastor Bill Parsley officiating. Interment will follow at Reber Hill Cemetery.

Ralph S. Lindsey, better known as Sonny, stepped into heaven on April 6, 2022. Born September 18, 1934. He passed peacefully in his home surrounded by love. He'd tell you his greatest accomplishment was his family. Especially his children... View Obituary & Service Information

The family of Ralph S. "Sonny" Lindsey created this Life Tributes page to make it easy to share your memories.

Send flowers to the Lindsey family.