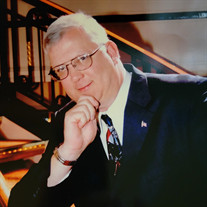 Robert Daniel Cogley of Reynoldsburg, is preceded in death by his father, Robert M. Cogley and mother, Patrice (Howlett) Cogley of Iowa. Dan is lovingly survived by his wife of 40 years, Joyce (Dawson) Cogley, Son Michael, Daughter-in-law Bridget, Grandson Dominic, Daughter Becky Milicevic and Son-in-law Cameron of Fl. Dan was very proud of his family and especially his grand puppies, Piper and Carl. Dan graduated from Lohrville High School. He spent 6 years serving our country in the United States Air Force. He met the love of his life at Rickenback A.F. base and he and Joyce were married on November 28, 1980. Dan was a project engineer for several companies in the water & waste industry. Later, he started his own company with his wife. Dan enjoyed spending time with his grandson, reading, and talking walks in the park with his family. He was a member and an usher for Reynoldsburg United Methodist Church, where he was active in a Bible study group. Dan was an active Freemason. He was a past presiding officer of Groveport-Lockbourne Lodge No. 801, F & AM; Walnut Chapter No. 172, RAM; and Columbus Commandery No.69. He was a Knight of the York Cross of Honour. Dan served as Worthy Patron of Groveport Chapter #440 O.E.S in 1998 and again with his wife, Joyce in 2018. He gave of his time and skill in support of Masonic youth groups. He was a past chairman of the advisory council for Groveport Chapter DeMolay and a Past Associate for Bethel No. 71 Jobs Daughters. His leadership ability was recognized by the Grand Chapter of Ohio RAM, whom he served as a District Grand High Priest, District Advisor, and Grand Marshal. He also served the Grand Commandery of Ohio Knights Templar as a Division Commander of the 5th Division. For his service in Commandery he was awarded the Knight Templar Cross of Honour. Dan was a founding member of local chapters of the Knight Masons USA; the York Rite College and St. Thomas of Acon. He was an active member of the HRAKTP,SRICF; the Red Cross of Constantine; the Allied Masonic Degrees and the Royal Order of Scotland. A Celebration of Life will be held Saturday, September 11, 2021 at Reynoldsburg United Methodist Church, 1636 Graham Rd. Reynoldsburg, OH 43068. Family will receive friends from 10 a.m. until time of Masonic Services at 11 a.m. Celebration of Life Service will follow at 12 noon. In lieu of flowers, the family requests donations in Dan's memory be given to: Adopt America at https://www.adoptamericanetwork.org/ways-to-donate OR Diabetic Kids Camps The Grand Council Benevolent Fund, Inc Diabetic Kids Fund PO Box 751538 Dayton OH 45475-1538 Phone: (937) 260-4523

The family of Robert Daniel Cogley created this Life Tributes page to make it easy to share your memories.

Robert Daniel Cogley of Reynoldsburg, is preceded in death by...

Send flowers to the Cogley family.