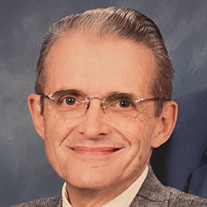 The Reverend Dr. Robert Ellis Snyder, 91, died of natural causes on Friday, October 29th. He was the son of the late Reverend Dr. Ellis Emmanuel Snyder and the late Pauline Walker Snyder. Bob is survived by his beloved wife, Paula Schumacher Snyder, daughter, Carol Elizabeth Snyder (Dan Barham) and her three sons, Andrew, Matthew and Jonathan Wells, and son, Paul Robert Snyder (Melissa) and their two children, Daniel and Kaylee. Bob earned a B.A. degree from Capital University in Columbus, OH, a M.M. from University of Colorado, Boulder, CA, a M.D. from Trinity Lutheran Seminary, Columbus, OH and a Ph.D. in Choral Literature and Performance from the University of Iowa, Iowa City, IA. Bob was a pastor at Faith Lutheran Church, Detroit, MI from 1956 to 1966. After completing his doctorate at Iowa, Dr. Snyder was a professor of Music and Director of Choral Activities at Eastern Illinois University in Charleston, IL from 1969 until he retired in 1995. He directed the EIU Concert Choir, which toured Europe two times and performed at the American Choral Directors Association National Convention in St. Louis, MO. Bob was president of IL ACDA and the Central Division of ACDA. He served as ACDA National Treasurer for four years. Bob served as interim pastor at Trinity Lutheran Church in Mattoon, IL, Trinity Lutheran Church in Shumway, IL, Trinity Lutheran in Olney, IL, St. Andrew Lutheran in Champaign, IL and at St. Paul Lutheran Church in Aiken, SC in 2004. Bob loved to travel and visited all 50 states and 34 countries. He and Paula retired to Aiken, S.C. in 1999 where he was a member of Woodside Plantation Country Club. Bob enjoyed golf, tennis, bridge and traveling. He spent countless hours at the baseball field with Paul and on the tennis courts with Carol. “I remember when….”was the start of many (detailed) stories. Bob would try to make you smile with a joke or tease the younger generation. When the nursing staff would take his blood pressure or need him to cooperate, “That will cost you a dollar” was his response. When his Buckeyes, his St. Louis Cardinals or the Detroit Lions didn’t cooperate, he would let the TV and anyone in the room know! He was committed to his faith, family and any choral concert he could attend! Bob and Paula moved back to Bloomington, IL in February of 2020 and resided at Luther Oaks. The family is grateful for the care and support of the Luther Oaks nursing staff. His jokes and sense of humor will be missed! A celebration of life service will be held at Christ Lutheran Church in Bexley, OH on Saturday, November 6th at 10am where friends may call after 9 am. Internment will be at Reber Hill Cemetery in Ashville, OH. In lieu of flowers, contributions may be made to Trinity Lutheran Seminary, with the Robert E. and Paula S. Snyder Church Music Scholarship in the memo line. Address: Trinity Lutheran Seminary; 2199 East Main St., Columbus OH 43209 or online at https://www.capconnect.org/donate with “in memory of Bob Snyder” in the comment line.

The family of Rev. Dr. Robert Ellis Snyder created this Life Tributes page to make it easy to share your memories.

Send flowers to the Snyder family.