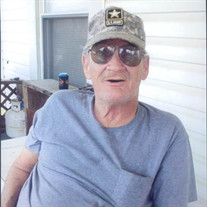 Robert E. Taylor Sr., 77, died Sunday January 9, 2022 at Dublin Methodist Hospital. He was born on July 19, 1944, in Columbus, Ohio to the late John A. and Louise M. Taylor. Bob graduated from Pickerington High School Class of 1964. Following graduation, he served in the United States Navy, Army, National Guard, and the Fighting Seebees. After the Vietnam War, he married his sweetheart, Doris C. Fink, and they settled in Columbus, Ohio. They celebrated 50 years of marriage on May 9, 2021. Bob is a past member of the Teamsters Union and retired from The Columbus Dispatch and Franklin County MRDD. Surviving in addition to his wife Charlene, are his sons Robbie (Becky) Taylor and Bobby Taylor Jr.; daughters, Christine Bennett, Marie Taylor, and Shannon (Warren) Born Weeks; brother, Arthur Taylor; many grandchildren and great grandchildren, along with many nieces and nephews. Those who wish to remember Bob in a special way may make gifts in his memory to the Veterans Administration or Alzheimer's Foundation. Visitation will be held on Wednesday, January 19, 2022 at O.R. Woodyard Co. South Chapel (1346 S. High St. Cols. OH, 43207) from 11 AM until time of service at 1 PM. Interment will follow at Franklin Hills Memory Gardens in Canal Winchester, Ohio. Zoom Link for service at 1 pm https://us02web.zoom.us/j/86116216311?pwd=M1ZhQ09hWWFtTm9BbjNxSnBZUGkzZz09

The family of Robert "Bob" E. Taylor Sr. created this Life Tributes page to make it easy to share your memories.

Send flowers to the Taylor family.