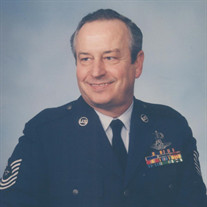 MSGT Ronald "Ron" D. Rice, age 84, died peacefully May 5, 2022 after an extended illness. Ron was born March 18, 1938 in Columbus, Nebraska. Preceded in death by his loving wife, E. Jane (Holys), parents, Bob and Lucille (Louis) Rice, lifelong residents of Columbus, Nebraska, and sister, Karen Gigstad. A 23-year career U.S. Air Force veteran, he flew on multiple propeller and jet aircraft for SAC and TAC as an airborne radio operator for 17 years with thousands of hours in the air. His worldwide flying took him to six out of seven continents, landing in 53 countries. MSGT Rice had many isolated tours from months to year-long stints in Saudi Arabia (1967-1968) and Southeast Asia (Vietnam War 1970-1971). He flew his final years on the first EC-135 Tactical Air Command Post out of Seymour Johnson AFB, NC. Retraining as a military air traffic controller after Vietnam, MSGT RIce was last stationed at Lockbourne (Rickenbacker) AFB in Columbus, Ohio. He had a Outstanding military career and earning multiple medals including the Meritorious Service Medal and the Combat Air Medal with 2 Oak Leaf clusters and Presidential Unit Citations. Ron loved to read, had many hobbies (cars, fishing, golf, and woodworking) and enjoyed travelling the U.S. in his RV. Ron leaves a daughter, Barb (Linda); sons, Greg (Elinor), Mike (Tracie), and Matt (Kim); grandfather of six and great-grandfather of two. He is also survived by brothers, Don and Phillip and many cousins. In lieu of flowers, the family requests you make a small, extra donation in Ron's name to your church or favorite charity. Visitation will be on May 17, 2022 from 4 PM to 7 PM at the Myers-Woodyard Funeral Home, 587 Main Street, Groveport, Ohio. Interment will be on May 18, 2022 at 10:30 AM at Fernwood Cemetery, 460 Rowe Road, Lockbourne, Ohio.

The family of MSGT Ronald "Ron" D. Rice created this Life Tributes page to make it easy to share your memories.

Send flowers to the Rice family.