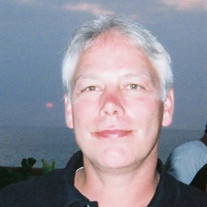 Russell James Martin, age 64, of Columbus, passed away January 8, 2022, after a short battle with cancer with his three children by his side. How do you tell the world what it has lost in losing a man such as this? Russ was a devoted son, brother, father, and friend to many; and the best neighbor you could ever ask for. He was born in Bellevue, OH on 9/2/57 to parents, Ballard Martin and Norma Jones (Dickens). He had four brothers, Rudy, Rick, Ron, and Roy with whom he shared an unbreakable bond. He had an unmatched work ethic. He enlisted in the United States Marine Corps when he was 16 and started serving his country when he was 17. Working at the Pillsbury mill in Huron, OH after being honorably discharged from the Marine Corps before joining his brother, Rick, to work as a pipefitter at Didion's Mechanical in Bellevue. He and his family relocated to Elmira, MI in the mid-90's where he worked in the maintenance department at East Jordan Iron Works for a short period of time before accepting a position as a Class "A" Millwright at Georgia Pacific Corporation. He worked at GP for over 10-years until relocating to Columbus, OH where he eventually found work with Prime Equipment Group. He worked his way up at Prime where he retired as a Research and Development Technician. His volunteerism didn't end with his time in the Marines. He was a medical first responder while at Georgia Pacific and served as President of the plant's local trade union, the International Association of Machinists and Aerospace workers. The bulk of his volunteer time came as a dedicated neighbor. If Russ Martin moved in next door, or even a dozen houses down, you had someone who was going to mow your grass, shovel the snow in your driveway, fix your car, care for your pets, offer you a beer or invite you over for a barbeque. Russ's interests included: learning, home improvement, coin and knife collecting, fishing, cooking and smoking meat, investing, shooting guns, kayaking, camping, watching movies, and he loved the Simpsons…"Doh!" He loved his children more than anything in this world and raised them to be courageous, empathetic, and to play just as hard as you work. He is survived by his son and his fiancé, Erik Martin and Jennifer McKillips of Sandusky, OH and their children Rayven, Ethan and Trent; his son and his wife, Alex and Janet Cerveniak of Gaylord, MI and their children Taylor and Coleman; and his daughter and her fiancé Michelle Martin and Adam Gauthier of Orrville, OH and their children Jackson and Olivia. He is preceded in death by his father Ballard Martin; his mother Norma Jones; and his brothers Ron Martin and Roy Martin. Friends and family may gather Saturday, January 15 from 1 pm until the time of Memorial Service at 2 pm at the O.R. Woodyard Funeral Home at 2990 Bethel Rd. in Columbus, OH. Friends may continue to celebrate Russ with a cookout to follow the service at his home. There will also be two memorial barbeques to celebrate Russ on 7/23/22 in Sandusky, OH (contact Russ's son, Erik, or daughter, Michelle, for details) and again in Elmira, MI on 9/4/22 (contact Russ's son Alex for details).

Russell James Martin, age 64, of Columbus, passed away January 8, 2022, after a short battle with cancer with his three children by his side. How do you tell the world what it has lost in losing a man such as this? Russ was a devoted son, brother,... View Obituary & Service Information

The family of Russell James Martin created this Life Tributes page to make it easy to share your memories.

Send flowers to the Martin family.