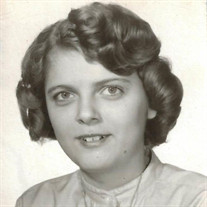 Sandra “Sandy” Lou Ritchie Layne (Vanantwerp), age 76, passed away peacefully on Sunday, September 12, 2021, at St. Joseph Hospital in London, KY. She was born January 26, 1945, in Columbus, Ohio. The daughter of Andrew Jackson Blevins and Hattie May Brown. She was a private home health caretaker, and a restaurant worker. One of her favorite pastimes was chatting online on her computer with her many friends and family. She was a devoted mother, very dedicated wife, a special aunt to her many nieces and nephews, and one of the most compassionate, trusting, giving sisters a sibling could ever want. In addition to her parents, Sandy was proceeded in death by the love of her life, of 34 years, her husband Berchie Layne, and husband Marshall Vanantwerp (divorced); three granddaughters, twins Brandy & Krystal Blade, and Chelsea Zinda. Brothers, Ronald Brown, and Joey Jay Blevins. Sister, Marian “Louise” Brown. She is survived by her daughter, Tina Layne Watson (Bruce), and sons, Pernell Layne (Robin), and Steve Layne (Courtney). Grandchildren, Nathaniel Pettit, Shane Zinda, Chyna Layne Fisher, Connor Layne, Autumn Layne Wallis and Kevin Kraus. Brothers, Darrell Blevins, Larry Blevins, Paul Blevins, Kenneth Blevins, and Robert Brown. Sisters, Pamela Brown May, Margaret Blevins Tackett, and Linda Blevins Goodman. Four great grandchildren, and many nieces, nephews, in-laws, and friends. She will be deeply missed by her family, friends, and all who knew her. Visitation will be held Thursday, September 16, 2021, at the O.R. Woodyard Funeral Home, 2300 East Livingston Avenue, Bexley, Ohio from 11:00 to 12:00 followed by a special eulogy and song presented by her sister-in-law Ina Sue Hazlett and niece Lenna Sue. The family will hold a private graveside service consisting only of her immediate family.

The family of Sandra L. Layne-VanAntwerp created this Life Tributes page to make it easy to share your memories.

Send flowers to the Layne-VanAntwerp family.