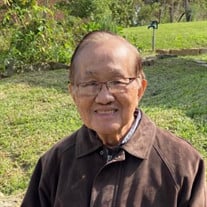 Sunthorn Sirivanakarn, 88, passed away peacefully on November 13, 2021 at the Ohio State University Wexner Medical Center in Columbus, Ohio. Sunthorn was born on October 28th, 1933 in a rural village in Tabput-PhangNga, Thailand. As a child, he contracted malaria and almost died. With the help of a medicine man and loving parents who nursed him back to good health, Sunthorn survived. Both of Sunthorn’s parents passed away by the time he was 14. Sunthorn excelled in school and received the opportunity to study biology at Chulalongkorn University in Bangkok, Thailand. He had 2 older brothers who helped to sponsor him. It was at Chulalongkorn that Sunthorn met his future wife, Rajanee Mekanandha. The two were married on November 28th, 1965. Prior to their wedding, Sunthorn was offered scholarships to study in the United States. He spent eight weeks in Ann Arbor, Michigan learning English, and went on to study in Minnesota, and the University of Colorado Boulder in 1958. After marrying Rajanee in Thailand, the newly wed couple relocated to the United States where Sunthorn earned a Ph.D in zoology from the University of California, Los Angeles (UCLA) in 1967. After graduation, the couple moved to Arlington, Virginia where Sunthorn worked as an entomologist at the Smithsonian Institution in Washington DC. He even named a variety of mosquito after Rajanee. After working at the Smithsonian, Sunthorn began a second career at the Environmental Protection Agency (EPA) in Crystal City, Virginia doing research and data analysis. Sunthorn was very active in the Thai community of Washington DC. He spent the better part of three decades supporting three Thai Buddhist temples -- Wat Thai DC in Silver Spring, Maryland, Wat Tummaprateip in Mt. Vernon, Virginia, (now located in Accokeek, Maryland), and Wat Yarnna Rangsee in Sterling, Virginia. He and Rajanee were active in the Chulalongkorn University Alumni Association of Washington DC. Sunthorn spent the majority of his life in Arlington, Virginia and was proud to be an Arlingtonian. He will be remembered for his kindness, generosity and great sense of humor. He laughed a lot, especially in his older years. He was also a lover of classical music, particularly the violin, which inspired his daughter Nancy to take up that instrument. He was loved by many friends, neighbors, and relatives in the United States and Thailand. He is predeceased by his wife of almost 55 years, Rajanee, who passed away on March 22, 2020. He is survived by a younger sister in PhangNga, Thailand, son Ronasit (Ronnie), daughter Nantinee (Nancy), son-in-law Jeremy Klapper, and granddaughter Melanie. A funeral service will take place at 2:00 PM on Sunday, November 21, 2021 at O.R. Woodyard Funeral Home, 1346 S. High Street, Columbus, Ohio 43207. Thai Buddhist monks from Wat Buddha Samakidham Temple, Columbus will lead the service. In lieu of flowers, the family requests that donations be made to the Juniper Waldorf School in Columbus, Ohio. Sunthorn was very fond of his one and only granddaughter, Melanie, and wished to support her in her education

Sunthorn Sirivanakarn, 88, passed away peacefully on November 13, 2021 at the Ohio State University Wexner Medical Center in Columbus, Ohio. Sunthorn was born on October 28th, 1933 in a rural village in Tabput-PhangNga, Thailand. As a child,... View Obituary & Service Information

The family of Sunthorn Sirivanakarn created this Life Tributes page to make it easy to share your memories.

Send flowers to the Sirivanakarn family.