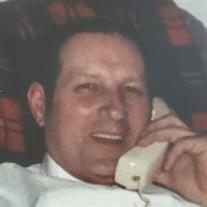 William E. Bond, age 84 years of Columbus, passed away peacefully on Monday evening, April 4, 2022, due to complications of Dementia. On August 22, 1937, Bill was born to John and Lucille (Musselman) Bond. Bill spent nearly all of his life in the South end of Columbus. As a young man, Bill was a standout athlete at Hamilton Township High School where he excelled in football, basketball, and track. Following his graduation in 1955, Bill accepted a scholarship to Northwestern University where he played football for 2 years. Following his time in Evanston, he served a tour of duty in the U.S. Army. He then returned to Columbus, where his first father-in-law and friend, Ralph Roof, helped him embark on a career in the meat cutting industry. Bill worked for many years at Red Barn Meat Company. He was later employed at the Sears Warehouse and FedEx. In addition, Bill worked for the Columbus Clippers as an usher at Cooper Stadium for many years. For over 25 years, Bill could be found working at Ohio Stadium and St. John Arena, sporting his coveted “Red Coat” at all Ohio State Athletic events. In 1967, Bill married Joyce (Crum). Together they lived happily in the South end, where they entertained their many friends, their daughter and her many friends, playing cards (Euchre), and taking vacations to many destinations including Apple Valley, New York and Vegas. Bill and Joyce participated in a Saturday night Bowling League at Rainbow Lanes for many years. Sadly, Joyce succumbed in February of this year. Bill looked forward to hunting, fishing and the travails of The Ohio State Buckeyes. In 2008, Bill was inducted into the Hamilton Township High School Athletic Hall of Fame. To all who knew him, Bill was happy, fun-loving, loyal and most of all, very memorable! Preceding Bill in death was his wife and parents, along with son-in-law, Mark Cannon; brothers, Clete and John; sisters, Patricia Phillips and Wanda Stover; and his father-in-law and mother-in-law, Elmer and Beulah Jude. Survivors include his daughter, Sherry (Cannon); sister-in-law and care giver Patricia Bond; sisters, Harriett Hudson and Helen Hutchins; and many nieces, nephews and numerous friends. Visitation for Bill will be Thursday, April 21, 2022 from 5 to 8 p.m. at the O.R. WOODYARD Co. SOUTH CHAPEL, 1346 S. High St. in Columbus, OH, where funeral service will be Friday, April 22, 2022 at 11 a.m. Interment will follow at Obetz Cemetery, Obetz, OH. The family kindly asks in lieu of Flowers to please consider a donation to the Alzheimers Association.

William E. Bond, age 84 years of Columbus, passed away peacefully on Monday evening, April 4, 2022, due to complications of Dementia. On August 22, 1937, Bill was born to John and Lucille (Musselman) Bond. Bill spent nearly all of his life in... View Obituary & Service Information

The family of William E. Bond created this Life Tributes page to make it easy to share your memories.

Send flowers to the Bond family.