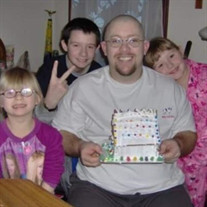 William Dominic Dallas, age 42, passed away unexpectedly on March 24, 2022. He was born February 20, 1980 in Columbus, Ohio to Dorothy Dallas-Bailey. Dominic was a veteran in the United States Army. He is preceded in death by his grandmother,... View Obituary & Service Information

The family of William Dominic Dallas created this Life Tributes page to make it easy to share your memories.

Send flowers to the Dallas family.